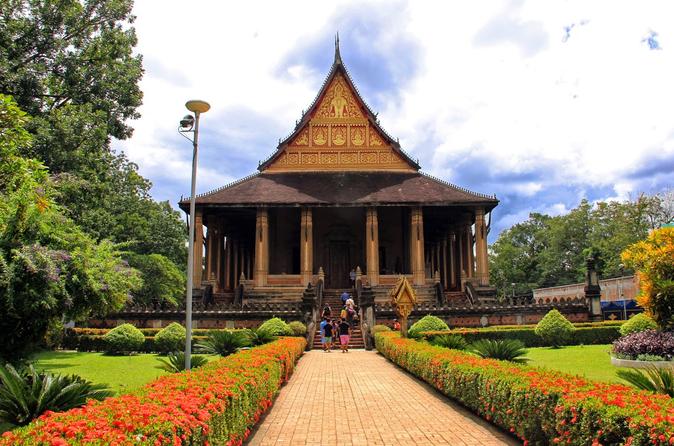 Vientiane is the capital and largest city of Laos, located in the banks of the Mekong River. This tour will take you visit many historic temples, national monuments, etc by bicycle in your own way.

After morning pickup, we will pick up our bikes and take a sightseeing tour of Vientiane, to visit religious museums of Wat Sisaket, the oldest temple to have been survived from the Siamese war of 1828 and its cloister contains more than 8000 Buddha statues; Ho Prakeo, the former home-temple of the Emerald Buddha statue or Pra Keo from the early time of Lane Xang Kingdom until 18th century, but today it contains a collection of Buddha statues, antiques and all artifacts found in around Vientiane; That Luang Stupa, the single most important monument in Laos, which was built to cover the original small stupa containing a piece of the chest bone of Buddha, That Luang serves as the main and symbolic stupa in Laos. It's also our national symbol and recognizable throughout the world, gathering place for national Buddhism ceremony. It's also the biggest stupa in Laos; Patouxay (Arc de Triumph), built quite recently in commemoration of those who died during the wars in the past and it is today as the land-mark of Vientiane.

Lunch is served in a local restaurant before heading to the excellent COPE exhibition centre, highlighting a much overlooked aspect of Laos and a major problem many of the local people face on a day to day basis in the form of unexploded ordnance as a result of heavy bombing campaigns during the Vietnam War area.  Return to your hotel by early afternoon where the rest of the day is at leisure.

Vientiane is the capital and largest city of Laos, located in the banks of the Mekong River. This tour will take you visit many historic temples, national monuments, etc by bicycle in your own way.