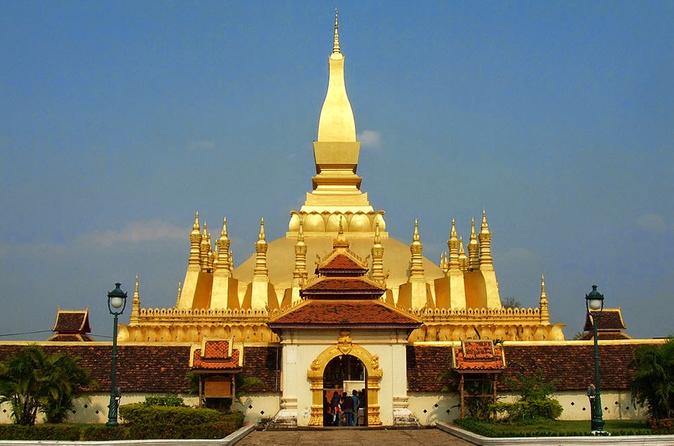 We start from Vientiane city the first is Horphakeo, then Wat Sisaket, Thatluang, Patuxay Stupa, moring market and have lunh after your lunch firnished, we start to Buddha park and end at textile village

Vientiane, the capital of Laos houses a great number of temples. Many were built in the 16th century when King Setthathirath had made the town the new capital of the Lan Xang Kingdom. Unfortunately, most were destroyed by invaders of Siam (present day Thailand) when their armies looted and burned the city in 1827.
Ho Pha Keo temple got its name from the Emerald Buddha that was enshrined here until 1779. It has been turned into a museum that displays 18th century bronze Buddha images, ancient inscribed steles and other artifacts.
Wat Si Saket is the oldest temple in Vientiane that is still in its original form; it is one of the few temples that escaped the destruction of 1827. The sim and surrounding galleries have been turned into a museum that house over 10,000 Buddha images.
Pha That Luang, the most important Buddhist monument in Laos is believed to enshrine a relic of the Buddha. The stupa was destroyed in 1827; the current version dates from the 1930’s when it was rebuilt by the French. Around the golden stupa are a few temples and a large Buddhist convention hall.
Buddha park, It was built in 1958 by Luang Pu Bunleua Sulilat, a monk who studied both Buddhism and Hinduism. This explains why his park is full not only of Buddha images but also of Hindu gods as well as demons and animals from both beliefs. The most outstanding ones include Indra, the king of Hindu gods riding the three-headed elephant (aka Erawan and Airavata), a four-armed deity sitting on a horse and an artistic deity with 12 faces and many hands, each holding interesting objects. They are all equally impressive not only because of their enormous size but because they are full of interesting details and interesting motifs. There is a local eatery and café offering food and drinks to tourists at one end of the park right next to the Mekong River that makes a great spot to chill after all the walking and climbing. Among the popular snacks are papaya salad, fried bananas and cold Lao beer. It also has a souvenir shop and restrooms. There is a small fee for entering the park as well as for photography.
Inclued
1. Transfer
2. Lunch
3. English-speaking guide
4. Entrance fee
Excluded
1. Gratuities (optional)
2. Personal expenses
3. Other services not mentioned above.
※Textiles-village: close on Sunday; alternatively visit Wat Simuang.
Cancellation Policy
-If you cancel at least 7 day(s) in advance of the scheduled departure, there is no cancellation fee.
-If you cancel between 3 and 6 day(s) in advance of the scheduled departure, there is a 50 percent cancellation fee.
-If you cancel within 2 day(s) of the scheduled departure, there is a 100 percent cancellation fee.

We start from Vientiane city the first is Horphakeo, then Wat Sisaket, Thatluang, Patuxay Stupa, moring market and have lunh after your lunch firnished, we start to Buddha park and end at textile village